What’s the One Thing That Frustrates You Most About Learning Japanese? 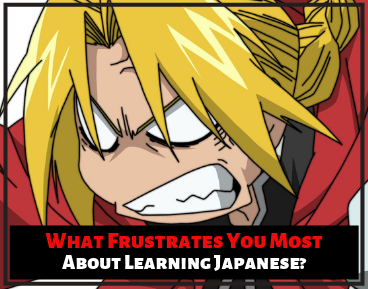 Japanese is often billed as one of the hardest languages to learn, at least for us "Westerners."

Today I want to start a real dialogue about a real question that many of you will be able to relate to: What's the one thing that frustrates you most about learning Japanese?

We're enamoured by so many aspects of Japanese culture.  We're anime geeks, video game fanatics, Japanese food lovers, Tokyo fashionistas, and everything in between.  Some of you may even be like me, where you actually had an interest in Japanese culture before that annoying term "weaboo" ever existed.  Does anybody else out there ever get called "weab"?  Sigh...

Today it doesn't matter. If you're an absolute beginner, studying Japanese for the first time, I want you to jump in and share your thoughts.  Whether you've been trying and failing at this for years, jump in and share your thoughts. Even if you're one of the ones has a true grasp of all aspects of the language and failing at the language for years, I want to hear what you have to say.

I'm writing this post on the heels of a short Facebook post where I posed the very same question to some of you over on the the Japan Guy Facebook page.  I was surprised at how many people interacted (yes, even for a sponsored post): over 100 comments, 30 shares and 600 likes:

Likes and shares aside, is this post really all that surprising? No, not really. It feels like Japanese is one of those languages that can genuinely confuse people. I'm a walking talking example of that.  I have days where I feel like I understand so much Japanese.  I see kanji that I can read and I don't stumble or stutter when I speak.

But I have bad days too, those days when I feel like I know so little There are days where the tiny section of my brain that's Japanese shuts down because it's overwhelmed by symbols it doesn't recognize.  Or how about those days when no sentence comes out exactly how I want it to?

Yes, it's embarrassing to feel like this even after ten years of being here.  But I'm being honest.  That's what happens to me.

I genuinely just want to get to a point where I have far more of those good days than bad ones.

You might be wondering "What kind of frustrations did people mention?"  Here are some of the ones that caught my eye:

Do you have similar frustrations about learning Japanese?  Different ones? It's time to find out!

For this particular post, I don't want make it too long. We're going to jump right into the discussion.  I may add content to this post later, but I want to hear more from all of you on this one than overwhelming you with my thoughts. I will be jumping into the comments section myself to talk about my own frustrations.

Tell Me What Frustrates You Most About Japanese?

If you have something that REALLY frustrates you, I'd like to hear more specifics about why it does.
Type your Japanese frustrations into the comments section below!
JI will read every single one of your comments and concerns.