Learning Japanese can be as fun as it is difficult or frustrating - especially if you're learning on your own.  Luckily, there are some extremely effective Japanese learning apps that can save you some headaches when you decide to strap in and go down this Japanese learning rabbit hole. 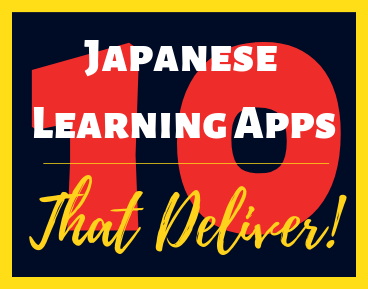 If you've been studying Japanese for a while, no doubt you've encountered some of the very snags that all Japanese enthusiasts run into.

Whether it's stumbling headfirst over some blasted Japanese particle, train-conductor-forcing kanji into your brain (and covering your ears so they don't escape), or just trying to figure out that last clever quip  One-Punch Man...because you think it's the best thing since sushi.

Trust me, I know your pain. Fortunately, there are some AMAZING Japanese apps out there that keep improving over time.

Today, let's take a look at ten popular Japanese apps that can help you make sense of the Japanese you're studying.  The majority of these are Japanese apps for iPhones (Google Play if you're an Android user), but this post will be updated over time as app, phones and how we study Japanese change at the speed of the internet.

I know I do this every time I write one of these types of posts, but it's ALWAYS better to be upfront with my readers!

This post includes affiliate links to iTunes, so I do receive a commission when you purchase apps via this page. However, I only recommended apps that I have personally vetted & genuinely find useful.

Now on to the apps! (Not listed in any order of importance) 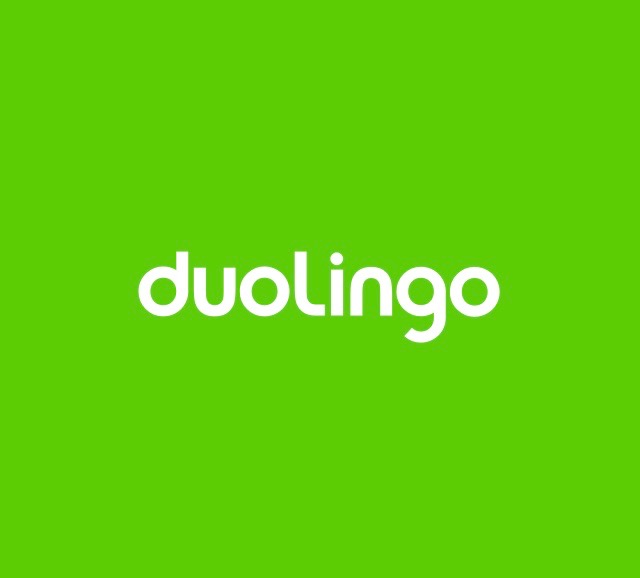 TYPE: Multipurpose Language App
COST: Freemium
With the free version of Duolingo, you get access to some great lessons, but you don't get access to everything.
Duolingo Plus (the paid version of this app) allows you ad-free offline access and the ability to unlock more content.
[$9.99/month, $47.99/6 months, $79.99/12 months]

First up is Duolingo, an app that I can't shut up about as of late - ask my friends! (irritated friends shake their heads in disapproval).

Duolingo is an app that teaches you a range of Japanese skills, without you even realizing it.  The lessons are theme-based (very similar to what Drops does with Japanese vocabulary).

Passive apps where you just look at a screen and swipe are nice.  In many respects, that's exactly how flashcards work.  However, Duolingo takes an alternate, but effective approach to learning new Japanese words and concepts.

DUOLINGO HELPS WITH THESE JAPANESE SKILLS: 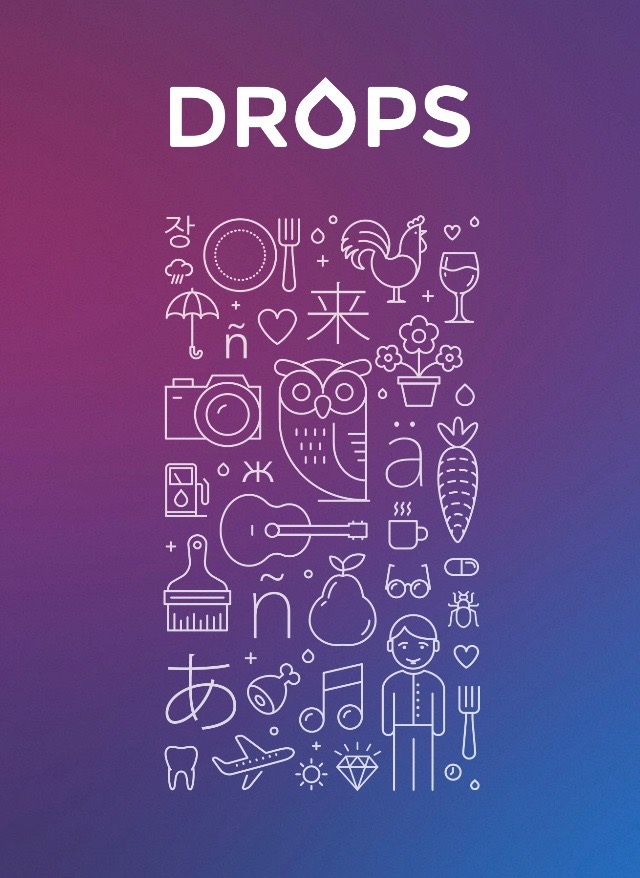 TYPE: Vocabulary Acquisition App
COST: Freemium
-You have access to a limited number of topics with the free plan.
-Upgrading - [$7.99/month, $50.99 yearly, or $64.99 lifetime] gives you offline access, access to all topic, no ads, etc.

Drops is essentially a vocabulary builder for many different languages. Luckily, Japanese is one the languages that you can choose to study from. This learn Japanese app emphasizes connecting pictures to the words you're learning. So instead of simply reviewing a flashcard with a word and sound bit on it, you see a mentally sticky picture of the word, while hearing it pronounced in Japanese.

This application is effective as hell when you consider the fact that they also were pretty smart about making exercises just a tad more interactive, which I find better for retention.

DROPS HELPS WITH THESE JAPANESE SKILLS 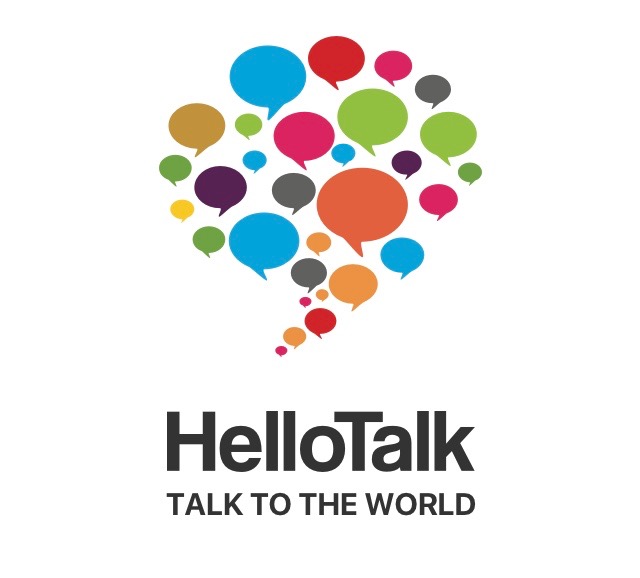 TYPE: Language Exchange Social Network App
COST: Freemium
You can have some great interactions with the free version of this app
The paid version gives you no ads. In addition, (according to HelloTalk) you get nine times more exposure than regular members. I guess that means the likelihood of having more frequent conversation increases as a paid member.  Makes sense.
[$4.99/month, $32.99/year, $74.99 lifetime]

Definitely one of the more creative Japanese learning apps on this list. While it doesn't train you to learn and understand Japanese in the traditional sense, this app is interesting because it connects you to community of native Japanese speakers (or whatever language you choose to learn). The concept makes a whole lot of sense.

It's a messaging app designed for language exchange.

Sometimes the best way to pick up a language is by getting out there, making mistakes. The good thing about HelloTalk is that there's a chance to get these mistakes corrected by a native speaker.

I only recently started trying Hello Talk, but I just got back my first response and it's like having native email pen pals at your fingertips.

One thing to note, is that this is very similar to an desktop app that was released many years ago called Lang-8.
Lang-8 has an iOS app, too.  It's called HiNative.  Although I've never used it, I probably will just to test it.

Memrise is a SRS (spaced repetitions system) app that helps people to acquire new words and new kanji in the shortest time possible.  This Japanese application is centered around "courses." Courses are to Memrise what decks are to Anki. It's generally a block of related information that you see as often as you can so that you can remember as much as you can.

The cool thing about he the "courses" in Memrise is that they're often tied to some of the very books that you may be using. This creates that perfect opportunity to learn the words in your textbook and actually keep them in your memory.

MEMRISE HELPS WITH THESE JAPANESE SKILLS 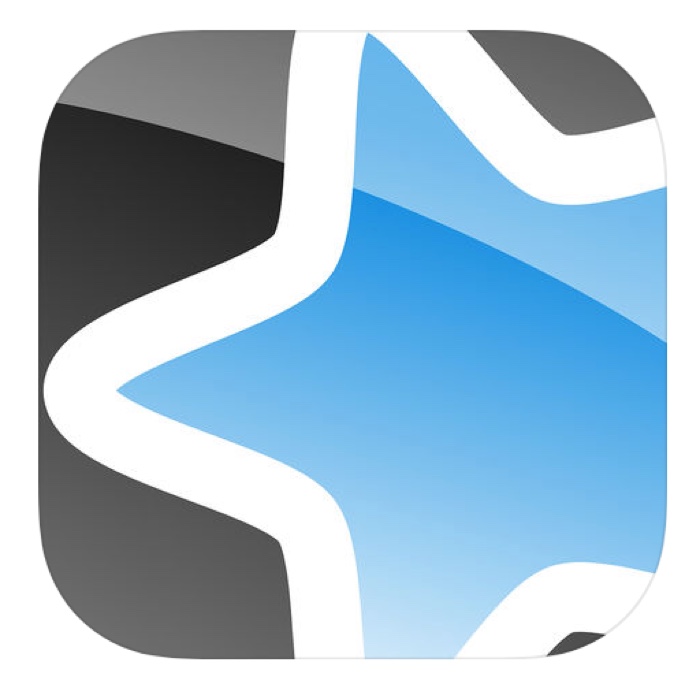 When you mention the term Spaced Repetition System, Spaced Repetition Software, or SRS, especially when it comes to learning Japanese - Anki ALWAYS comes up. It's like the original gangster of SRS systems. If SRS Japanese learning apps were the West Coast rap game, Anki would be the Chronic Album.

Anki is the quintessential SRS. It was my introduction to spaced repetition because it was recommended to me by so many successful Japanese students.  This is an app based on a "deck" system. This decks are like stacks of virtual flashcards. The software is set up so that you study more of the cards you don't remember and less of the ones you do.  If you can block of the time to be consistent with your decks and actually study with this SRS. You'll learn so much.

ANKI HELPS WITH THESE JAPANESE SKILLS 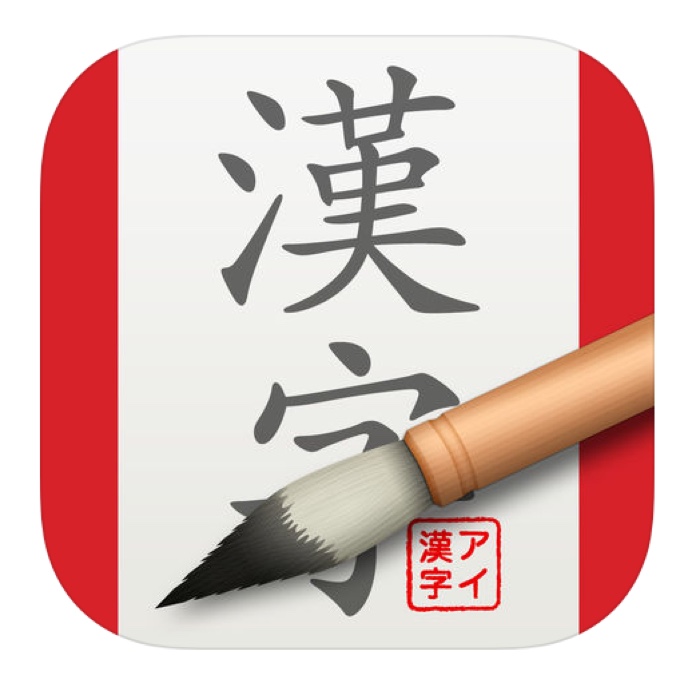 iKanji was one of the first apps I used to start improving my kanji. It's fun, engaging, and effective. This app systematically groups together kanji that you will need if a) you're studying for the 日本能力試験 (Japanese language proficiency test) or b) you want to know the essential JOYO kanji that a Japanese child learns from first grade to high school.

You'll find lists out everything you need to know in iKanji, which is very helpful. It also has a built in spaced repetition system that gets you studying the kanji you struggle with most. 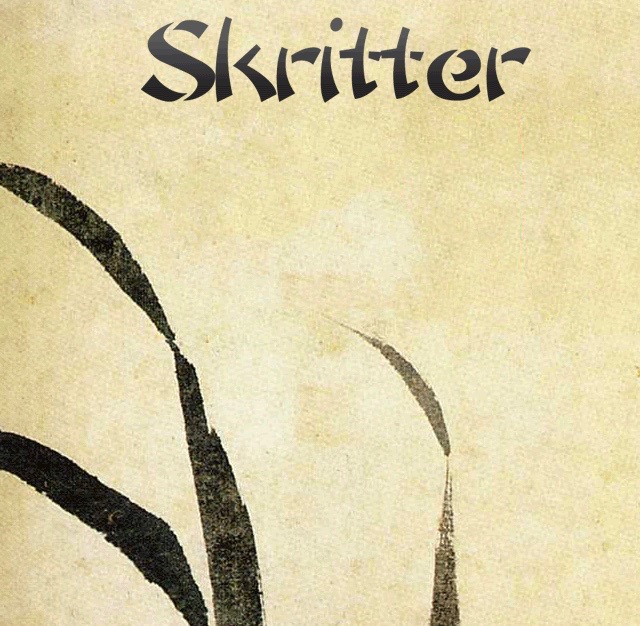 Though I hate to admit it, Skritter was one of those apps that I had written off as a bandwagon app, that was just trying to make some extra cash from the iTunes App Store. Sure all app developers want their software to do well. But I was pleasantly surprised by Skritter.  It's a kanji app that forces you to come up with the symbols in your own head and write them in the correct order.

In addition, Skritter links the kanji you're learning to compounds, so you end up seeing the kanji how it would actually be used. I started with just the free trial. However, this is one of the few apps that I'm willing to dish out some money for.  I really just want to see if it continues to make the kanji stick as well as they have been with my early testing of the app. 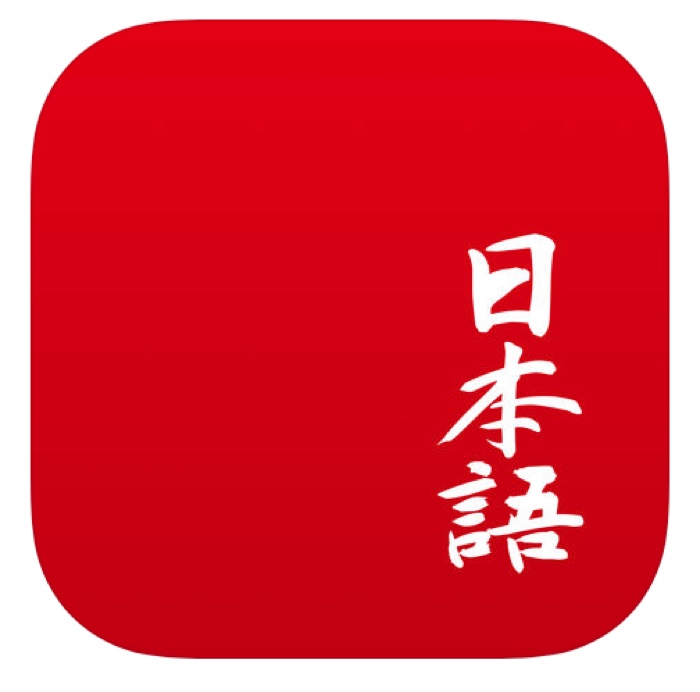 Pure gold! That's how I'd describe this app. It's the Japanese dictionary I've been using for at least six years now.  And you know what? I use at least once a day, maybe even more than that if I'm really in my studying zone.  Of this list of apps, this is the one I use the most!

Japanese by renzo Inc. was an app that I gladly paid for back when I first bought it. But Japanese is now a free app.  Honestly, I was worried when the app went from paid to free. Was the quality of the app going to suffer?

I'm glad to say that this Japanese dictionary app is the best it's ever been and you'd be hard-pressed to find a dictionary that even comes close.  Incredibly powerful stuff.

At its core, this app is a Japanese. However, it's become so much more over time.  It's a VERY effective SRS flashcard system & flashcard deck creator, furthermore it's one of the most reliable Japanese translator apps out there, a reference tool, a JLPT guide...you name it. 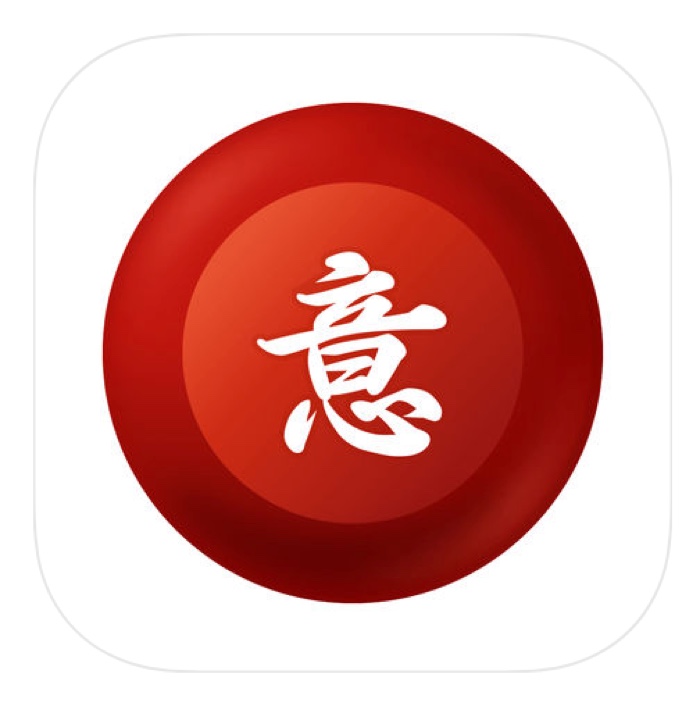 We can't mention Japanese dictionary apps without mentioning Imiwa? It's the go-to dictionary for so many Japanese learners and it's easy to see why. Imiwa? Is a simpler, but still VERY effective, Japanese dictionary. Despite it being less robust, it has everything you need to lookup the words and kanji you need when you get stuck on something.

Imiwa? is also a great way to see what kanji radicals look like - if you're kanji studies are leading you down that road. 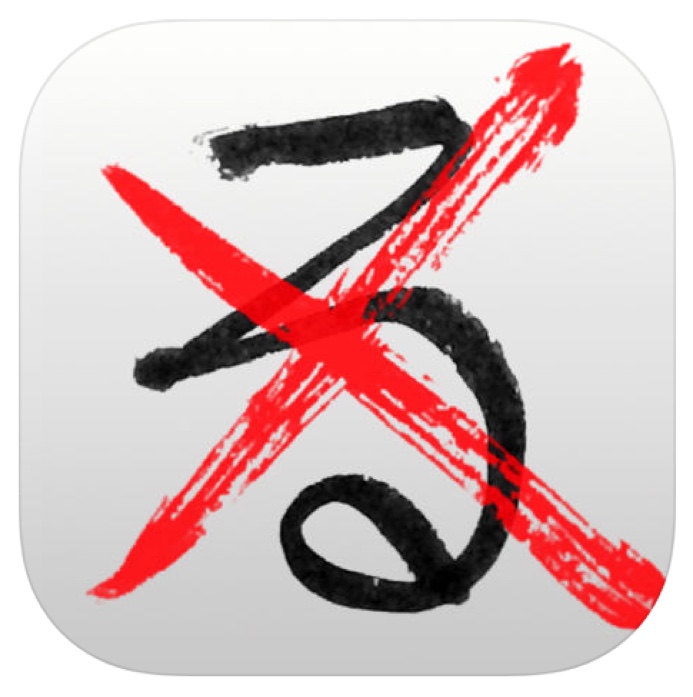 You probably won't find this app on many (if any) best of Japanese learning apps for your iphone.  I stumbled upon the app by accident after going to one of my very first, official, Japanese classes. I hadn't been practicing so, I was tripping over conjugation while I was speaking.  I came across this app, and it was EXACTLY what I needed.

Which One Is The Best App To Learn Japanese?

So which of these is the best app to learn Japanese?  The one that works best FOR YOU! I may find an app useful that doesn't resonate with your learning style.  And it's important to be honest with yourself about that.

For example, with Japanese textbooks, I heard everyone and their mother recommending Heisig's Remembering the Kanji. While it's not a bad book, It wasn't right for me.  Treat apps the same way. Test until you find what works.

Should I Buy All of These Japanese Apps at Once?

You can. BUT I don't recommend it. It's not necessary to get all of these apps at once.  Find some aspect of your Japanese that you want to improve RIGHT NOW! Focus for a while on improving that thing before you buy up the entire app store.

You have to do that.

But I'm confident that if you do, your Japanese will improve more than you ever thought possible.  I'm not preaching, either
(Donnie takes out his textbook and iPhone) I'm here studying right alongside you.

WHAT ARE YOUR
TOP THREE
LEARN JAPANESE APPS?

My list isn't (by any means) the definitive list of learn Japanese apps. If you saw any of these apps that you really like to use, please share your experience in the comments below.

If there's a Japanese learning app that's not on this list and you really like it, tell us about it 🙂

Share your top three in the comments section below!