Six Differences Between a Japanese Shrine and a Japanese Temple Otera (お寺) vs. Jinja (神社)

Characteristics of a Japanese Shrine: Fushimi Inari Shrine in Kyoto, Japan. One of the best I've ever been to.

Japanese shrines (じんじゃ神社) generally are based in Shintoism which is a set of Japanese spiritual beliefs. So many of these shrines have features and designs that are unique to Japan. For example, you’ll find tori archways at shrines.

Standing in front of a Tori, 鳥居, or Shinto Shrine Archway

Generally you can also tell by the name if you’re at a shrine. Often you will hear the word jingu (じんぎう or 神宮) in the full name which literally translates to mean Shinto shrine. What else? In a Shinto shrine will always find one or more torii archways. Shrines usually have the purification troughs for cleansing your hands and mouth before entering, too (this may be a feature of both shrines and temples, but honestly I forget). Shinto shrines are centered around kamisama or gods. Before you say a prayer, you’re supposed to clap twice in a shrine. Shrines also usually have some kind of guardian animal, like a dogs or in the case of Fushimi Inari, foxes.

Characteristics of A Japanese Temple 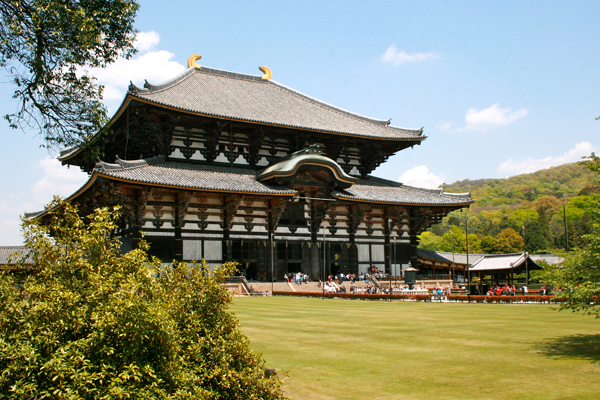 Todaiji in Nara, Japan. In a word...breathtaking!

Japanese temples (おてらお寺) are based in the facets Buddhism rather than Shintoism. Because of this, you can find similar temples in countries that practice Buddhism (i.e. China, Japan, and China). In the same fashion as the shrine, the name can be a dead giveaway as to whether you’re in a temple or a shrine. Simply listen for the ji sound at the end of the name. For example Sensoji, Todaiji, Kinchoji, Kofukuji, etc.. Well what about Meiji Jingu, you ask? Well Meiji is the name of a Japanese historical era, so it’s a special case…but it is in fact a shrine.

In a temple you’ll also find a senko or incense burner (do they have these at shrines, too? hmm). You use these to “purify” yourself before going inside the temple. Doesn’t smoke make you dirtier? I’m just saying…lol.

Instead of finding tori archways, you have pagoda, the cool-looking multi-tiered towers that are often associated with Asian architecture.

Prayers inside of a Japanese Buddhist temple are silent (that’s what I’m told anyway).

Let’s summarize these seven differences in a table shall we?

I know some of the major differences between the two, but there are some minor differences I’m still a bit hazy on. Definitely a subject that’s up for some rehashing later.
Yamaguchi Sensei and Iijima Sensei, thanks for clearing that up for me!